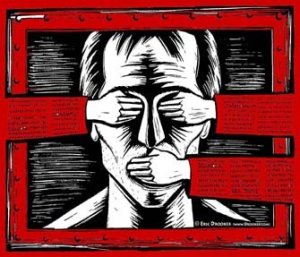 It’s the wee hours of the morning and another sleepless night of being plagued by a conversation about ‘the news,’ more correctly a warning that I’m not reading the correct version.

I discovered during this conversation that there are multiple versions in each state. The assertion is that Arizona has its version that differs from that in the Peoples Republic of California (PRC).

When added to all the other aberrations from my week, this admonishment kept my mind in hyper-drive all night.

I gave up trying to sleep, so here I sit, working on this post.

The profound issue of truth goes deeper than a single conversation, and there have been several. It spurs thoughts of how elitism changes facts and its encroachment into every facet of our lives, especially our government.

The assertion is that my choice of news sources does not give me the correct view of reality and what’s happening in the world. The allegation is that my erroneous selections don’t employ facts or represent the truth.

Apparently, this person knows of sources that I do not because I’m just reading the wrong ones.

Perhaps we’ve all lost track of what truth and reality are.

I’m not convinced that there are alternate realities, only interpretations of what is – we call it perspective – or reality breaks down and becomes the fantasy we live in today.

How could I be so wrong?

How can a reasonably well educated, well-read, intelligent person be misinformed for so many years?

You might be wondering and asking the same question.

Think about this for a moment. Are we getting the truth?

In the age of information overload, the maelstrom of the media misinformation and questionable, unsubstantiated sources, where do you find the truth, the facts, or reality?

This past June, I posted a six-part series called “Who Wins?”. In this post, I discuss the rationale for the perpetual lies and misrepresentations by the media. It’s a comprehensive look at the issues I see in media and this industry’s business.

What I’ve seen from multiple news feeds supports the post mentioned above, specifically, an incident at our open southern border that accuses CBP agents of whipping the illegal immigrants. It is an absolute lie to gain media attention and to further political narratives. How can we allow our elected representatives the latitude to lie so blatantly?

Where are the repercussions, and what about personal responsibility? Lying is not implied by freedom of speech, but that freedom is the pall used by too many to obscure their duplicity.

When did our misuse of ‘free speech’ transmute opinions into facts and blur the lines between the intentions and abuse, and when did free speech introduce prevarication and deception as constitutionally protected?

Things are not facts just because we claim that they are – we must confirm them with irrefutable evidence, not more hearsay, and certainly not an opinion.

Does Free Speech really mean that we can say whatever we want without fear of repercussion or reprisal?

Then I can stand up in a crowded theater and SCREAM FIRE!?

Of Course Not… But that is the literal interpretation we apply so glibly.

The Constitution implies adult responsibility and sense, something we forego as we conveniently reinterpret its intent. “Well, it’s not specifically written in there.” No, Skippy, it’s not. It’s implied. The Constitution presupposes us to be adult enough to comprehend, not children, that require detailed directions and explanations.

Truth is obviously not the usual mainstream source; it’s not sensational enough to capture our attention or support their plan. They contort facts along overtly political and philosophical lines. They report more opinions and interpretations of the events as they choose to see them rather than reality.

They frequently contradict themselves and each other.

Where is the truth in this melee?

If a fact can be interpreted or modified to fit the narrative or the politics or plan, it is no longer a fact; therefore, it is baseless. This translation of an event is a common practice of every media company on the planet. So, who presents – reports the truth?

How do I/we choose the correct source for information?

More appropriately, is there a definitively trustworthy source?

Did GOD decide to broadcast the news?

The whole truth and nothing but the truth, so help me – ME!

Brought to you by the good folks at Manna from Above — Heavens, It’s Good!

These incidents reinforce my opposition to the elitist attitude prevalent in America today. We’re expected to accept what knowledgable nobles say as unquestionable truth and that their view is the only correct and acceptable answer.

Those who do not share it will be disregarded, discarded, deleted, and defiled.

Welcome to the Cancel Culture; The Arbiters of Truth, Justice, and the New Democratic-Socialist-American way.

If truth were absolute as it should be, any interpretation would prove unnecessary, and the evidence would stand alone. Yet, we tainted reality with statutory wrangling and loop-hole gymnastics to avoid veracity.

We duck and dodge to obfuscate and diminish the power truth carries, subjugating it to the shadows of conjecture.

We slice and dice the meanings of words and contest the meaning of the word ‘is.’

Elites refuse to accept any answer that disagrees with what they embrace, deflecting and negating any discourse with the exclamation – no, you’re wrong, those are not the facts, thus bolting the door of an already closed mind discontinuing discussion or the propounding of opposing viewpoints and the truth.

“Don’t confuse me with facts; my mind is made up!”

An elite position stems from a belief and insistence of superiority. Regardless of the substance of this belief, it’s demeaning to everyone involved.

Financial wealth does not imbue you with anything but a preponderance of perceived purchased power. You’re not smarter or brighter, just rich. Wealth is the reward for hard work or a well-conceived and successful crooked endeavor. Either way, it does not make you superior.

Education is another false construct often mistaken for ability, competence, understanding, and wisdom. I find education to be a hindrance in many cases. Instead of ably applying the acquired knowledge, people rely on knowing, and my favorite remark – “Well, the book says…”

Celebrity is the final misbegotten and foregone illusion. We elevate the wrong people to these demagogic heights. Most of them are ‘one-trick ponies,’ not wellsprings of wisdom. In practice, they are lucky, not generally brilliant, indeed not moral ambassadors, or stellar examples of humanity. However, a diminutive few turn their celebrity to humanitarian pursuits. They are the exception, not the rule.

In military parlance, “They talk the talk, but can they walk the walk?” They know what to say, but can they actually do it? I call this “Buzz-Word Compliant.” They know the terms but have no idea what they mean or how to use them correctly.

Position or situation or is another thing entirely. People in positions or situations of power are like a post turtle.

Instead of owning the mistakes, they blame someone else or deflect the entire event by creating more chaos, only compounding the problems. The concatenation of catastrophes in this administration epitomizes the ‘post turtle’ analogy.

The elite exclusive erudite expectations that Bungles the Clown’s government tenure can magically actualize these events into positive outcomes is ludicrous. It is as if the Pharo’s of ancient Egypt returned – “So let it written, so let it be done.” Commands like this don’t work in a republic, especially in a country of contesting factions and despotic ideologues.

This Prague newspaper quote hits the nail on the head!

Here’s an extraordinarily accurate analysis from a Prague newspaper.

“The danger to America is not Joe Biden, but a citizenry capable of entrusting a man like him with the Presidency. It will be far easier to limit and undo the follies of a Biden presidency than to restore the necessary common sense and good judgment to a depraved electorate willing to have such a man for their president.

The problem is much deeper and far more serious than Mr. Biden, a mere symptom of what ails America.

Blaming the prince of the fools should not blind anyone to the vast confederacy of fools that made him their prince.

The Republic can survive a Biden, who is, after all, merely a fool. It is less likely to survive a multitude of fools, such as those who made him their president.”

Incidentally, I tried to post this online and was blocked. It’s evident that BigTech has no interest in propagating truth or other salient views, only a precisely selected sanctioned narrative paid for and supported by der Konigreich.

Proclaiming that the Emperor has no clothes es verboten!