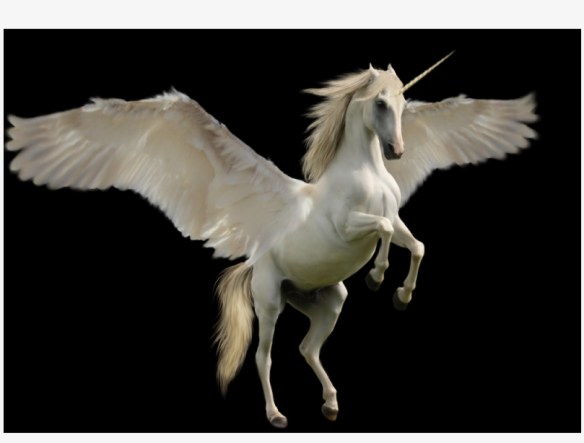 Winter has finally snuck into the Valley of the Sun while no one was watching.

I can hear the sardonic sighs emanating from the north – poor baby… I feel the same when local temperatures break the century mark, everything is too hot to touch, and your car’s interior is 170 degrees.

It must be Global Warming… Maybe Al Gore and John Kerry are inconveniently correct… AND perhaps the DemoSocs are destroying America for our own good… Both are equally plausible in today’s parlance and are ironically preposterous.

What’s the world coming to…

But can we blame global warming for America’s frosty political situation?

We’ll blame anyone for anything.

Can we blame the world’s reaction to our government’s spineless misleadership on political distractions and obfuscations of America’s blatant incompetence?

Americans don’t understand the complexities of destroying a country. It’s a tedious process to ruin a functioning republic. Just ask the Roman Empire. It took them over a thousand years – 1,101 – to be precise… we’ve only been at this for 247 years.

It’s not about the climate, the earth, or some other issue; it’s about money… and control… and being willing to do anything to obtain it – Sell your soul to the Devil!

Like all the manufactured crises in our republic, global warming is a mere distraction from the DemocSocs’ and the UN’s true agenda. This administration is hiding behind all of the disasters it created. The DemoSocs don’t want you to know that they will reduce our republic to an empty shell of its former self.

When they complete the socialist metamorphosis and hand us over to their partners, the Sino-Russian alliance and The New World Order, they earnestly believe we’ll all be better off. They certainly will – they’ll be running everything. Look around you… How well are they doing now?

You did know that Russia and China allied against us… Didn’t you? 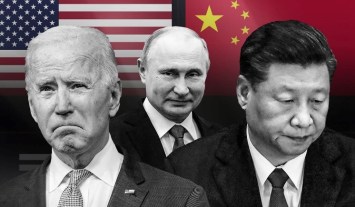 I’ve considered at least a dozen themes and titles for this post, but this one – Naive – stuck with me.

After several readings of naive’s definition, I realized that this one word epitomizes America and most probably is its epithet. – Naive –

I’ve pointed an accusing finger at the people in this country, insisting that stupidity and ignorance are our biggest failing. They are, but after considering this title, my observations tell me that the pernicious issue is education – programming.

People believe what they’re told. Case in point, “the border with Mexico is closed and secure.”

Yes, we’re brainwashed to trust these habitual liars. No one questions them or their message. We accept it because they are our elected representatives in the DC Swamp and, therefore, to be trusted.

I think a little skepticism is in order in light of current events. Learning to question what you hear and read is healthy – NOT un-American – it is truly in keeping with the foundational concepts of our republic. We, the people, take responsibility for running and guiding the republic. Sound familiar?

Are we not more intelligent than plants?

Either we’re too stupid to know any better, or we are more intelligent, but we choose not to care. I believe it’s the latter…

What does that say about the species that invented the airplane, split the atom, and created the internet?

What possible rationale is there when we embrace lies telling us that we’re worthless pond scum for using capitalism to create a vibrant economy that is the envy of the world.

Where is the logic in accusing half of America of being anti-democratic and anti-American for exercising our constitutional right to free speech – questioning our government’s decisions?

Biden warned, “American democracy stands at the precipice because of a decidedly different threat — one that, he said, comes from within the country’s borders.” [Link]

Bertrand Russell wrote: “In all affairs it’s healthy now and then to hang a question mark on the things we have long taken for granted.”

In my latest article – BOHICA – I admonished readers to “Learn to think for yourself because everything coming from the DC Swamp is a LIE!”

We MUST ask – does this sound truthful?

Can this be possible?

Does what I hear make sense?

What do I see that makes me wonder?

What do opposing sources have to say? 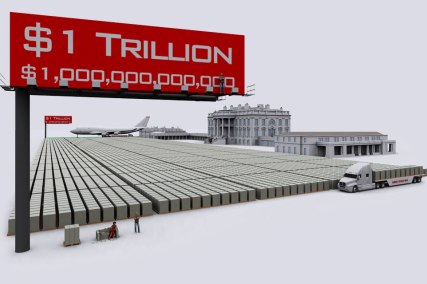 Is maintaining $173.4 Trillion in unfunded liabilities, increasing our $31.5 Trillion national debt, and dumping trillions of dollars into the failing economy a sound fiscal policy?

How long do you imagine you can keep this up before the bank cuts you off?

How long before the sheriff pounds on your door?

Why do we tolerate this from our government?

The caveat here is that the government owns the bank.

Are we that naive?

Thinking is the process of using one’s mind to consider or reason about something, but it’s not taught in our indoctrination camps – in fact; it’s discouraged. We’re programmed to regurgitate memorizations. We rely on what we’re told rather than what we comprehend.

“Man is a credulous animal, and must believe something; in the absence of good grounds for belief, he will be satisfied with bad ones.”

Maybe we’re overly docile. We surrender when challenged. We back down from our comments because they are indefensible – we can’t back them up because we haven’t thought through the premise. Anything we do say is a canned response we’ve heard from the MMM or the NSSMP.

We have no original thoughts.

Our replies come from someone else because we’re nothing more than barely sentient parrots.

Is America on the Roman road to ruin?

Here’s the list of events that caused the fall of Rome [Link]:

If I replace a few select words in these eight sentences, I could draw a direct parallel between the fall of Rome to the fall of America. Further, I could predict the same outcome for America.

Let me be more specific with this parallel.

I’ll close with destroying the American idea of loyalty and duty to the country.

The government indoctrination camps spread hate and discontent about everything America stood for. The efforts to deride and malign our values are insurmountable when ingrained in children’s minds – I consider college students in that collective since the human brain is still developing up to age 25.

These susceptible young minds consume what they’re fed without question. They don’t know. They are naive. If socialist ideology and doctrine are their main intellectual diet, we can only expect them to become socialists.

The Hitlerjugend (Hitler-Youth) was established in 1933 to perpetuate the Nazi fighting force and leadership. It indoctrinated children in the Nazi ideology with a strong emphasis on the superiority of the German race as superhuman leaders by birth. 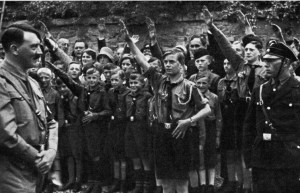 Our children, the DemoSoc Youth, are taught that racism is endemic and systemic in America. The entire litany of problems facing America is the White Race’s fault. The only way to achieve equity is by taking what belongs to someone – the white majority – and giving it to those they purportedly have wronged.

In reality, it is pure socialism, but we now call it Reparations – an extremely oversimplified lie built on falsely adapted history, ignored facts, and the socialists’ emotional interpretation. You need to understand the history of slavery from the very beginning of time to appreciate how our naivete supports this deluded assertion and the DemoSoc’s direction for America.

“Do the gods light this fire in our hearts, or does each man’s mad desire become his god?”

Yes, America is that naive!

For the Amalgamated Heavy