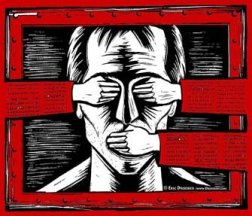 OK, I borrowed the title from a famous novel, play, and movie. Mine is more current than Mr Wibberley’s 1955 satire on the cold war. Come to think of it were fighting a war right now. Not with nuclear weapons but with words and ideas. Not in the open but behind closed boardroom doors and in the court of public opinion where there is no opportunity to defend or refute the accusation. You are guilty because the person on the bully pulpit says you are. This war is on a single amendment to our constitution, the first one that guarantees our right to free speech. In case you don’t have your copy handy, here it is.

“Congress shall make no law respecting an establishment of religion, or prohibiting the free exercise thereof, or abridging the freedom of speech, or of the press, or the right of the people peaceably to assemble and to petition the Government for a redress of grievances.”

The real problem here is that it’s not Congress that drafted the law it’s something we lovingly know as “Political Correctness” or PC for short. It’s not legal nor is it moral nor is it proper, it just is. What it has become is a way for people to control your right to free speech and free expression by invoking PC at any moment. We now live in fear of offending someone, anyone and that’s what this is all about. It is about erasing the line between what is reasonable and what is acceptable for an individual and applying their morals to everyone. Because I think something is proper for me, I demand that you abide by my views or I am offended and can take action against you.

There once was a woman called Paula Deen with a top-rated program on the Food Network. Sometime in her past, before she was on TV and before she anything she had a thriving business that crumbled to the ground around her because she used the “N” word… Mind you Ms Deen was in her 50’s when used this racial epithet and lived and worked in the deep south where that word is still in frequent use. Her admission of guilt destroyed her world.

Change the name to Rosanne Barr. This woman tweeted about a prominent politico, another woman’s’ looks and parentage. Disney Corp (The Mouse) promptly cancelled her top show and terminated her employment. Note that this action followed a Twitter post in which she shared an opinion. Thus the title “The Mouse that Roared!”

When any company has this amount of power, it should be using it for the good of everyone, not just to follow the conservative direction that fits false conservative political leanings. Miley Cyrus sitting nude on a wrecking ball comes to mind. OK, she was not a Mouseketeer at the time, but she is a creation of that same Mouse. Disney corporation was created by Walt’s family to bring great family-centric entertainment to the public. I can see Walt spinning in his Cryo-tube right now.

In my opinion, this is censorship pure and simple. I realise that The Mouse has a business to run business built on image. The image of a wholesome family loving conservative company. It his is indeed the case why would they hire a woman with Rosann Barr’s reputation in the first place? Did she sign a contract to renounce her ways to live a Mouse-Like lifestyle? When was the last time a Leopard, in this case, a Tiger changes its coat?

So it is censorship. Then call it what it is.

I don’t appreciate a mega-corporation deciding what I should or should not watch and I vehemently object to them setting my standards, even if I do like some of the older animated features.