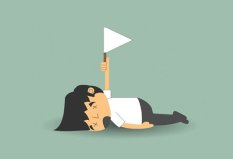 His exhausted, limp arms hung by his side, tired from waving the banner and beating the drum. The words that once flowed slowed to a trickle. His passion remained, but the energy to press forward was gone, sapped by ignorance an apathy. You cannot force people to see the things they don’t want to see. Their eye closed tightly and minds numbed by the sound-byte media spin, the prospective audience sits up slightly, and leans to the left or right feigning interest, and pressing delete.

The most challenging proposition to accept is that all men are created equal, knowing it’s not true. We are not equal. Some people care deeply, and others have no idea and don’t want one. They are comfortable with ignorance trusting that someone else will fix everything that is wrong. Apathy is crushing those that care.  Not taking action releases you from responsibility and culpability.  Then you can blame someone else if the action fails.

The goal is to remove all interest and to make us dependent surfs and vassals at the master teet. The government will fulfil all of our needs and tell us everything we need to know. After all, they want what is best for us. They know what our children need to know to be successful in the new world order, and our place in the latest version of America.

Where there was once a beacon illuminating the failures of modern education, there is now darkness. Where there was a source for truth in history, there is now only the interpretation of the victors. There is no real truth just speculation on poorly recorded and recounted events. The liberal machine twisted and rewrote the texts. They repurposed the message in support of their agenda and pushed this version into the classrooms. Who was watching?

Sometimes the best way to win is not to play. I can see the truth in it. I’m tired too. What more can you do? How much more can you give?  Why would we keep trying and fighting when we have lost? There is no honesty in the world, especially in America. Security is theatre, and privacy died a quiet death while Bush the lesser looked on. Empty promises or more handouts from the Emporer Obama who usurped the throne for eight long years to rend this country and constitution bringing new levels of corruption and media spin to justify the lie.

Each leader laid a course or two for the foundation upon which this nation grows; They built on the predecessor’s sins to create this our present state: to our shame. “We have the government we deserve,” said Joseph de Maistre in 1753. I think he saw this even then because there is nothing new in government or the corruption therein. It is all replayed age after age and in every country. Governments are people; people are corrupt, and they cannot be trusted.  Therein is the lesson.

He stood with his head low on his chest too tired to cry and exhausted from the struggle. He muttered, “we have lost, we have lost.” “Our precious country is dead.” “May history forgive our ignorance and apathy.”

And they took offence at Him. But Jesus said to them, “Only in his hometown and in his household is a prophet without honour.” Matthew 13:57

For my friend JB