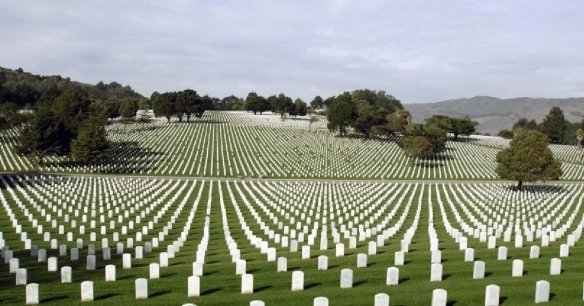 On a particular day every year we stop to remember and honour the soldiers who died for their convictions. The American version of this was called Decoration day: it still is in some places throughout this country. Our recollection and memorialising stated in 1865 after the Civil War (The War of Northern Aggression) as a remembrance of dead soldiers on both sides of this horrific time in American History. In a lightning fast reaction, Congress made Memorial Day a federal holiday in 1971.

The original idea of honouring the fallen is traceable back as far as 431 B.C. when during an oration at a funeral in Athens Pericles reminded the attendees to recall the sacrifice of the dead and to honour them. It was carried forward in reverence to the actions of the war dead by decorating their graves with flowers and ribbons as a memorial. We continue the idea with a bit more pomp and circumstance, but that is our way. We consecrate their contribution with a sale.

Human compassion is boundless sometimes. We seem to have an almost infinite capacity to feel the sorrow and pain of others. We empathise and sympathise with their loss. We speak gently of their contribution and their sacrifice. What we don’t see is how that compassion turns to avarice and quickly forget the sorrow when we chose aggression over diplomacy. Someone, some business type decided that this would be a golden opportunity to make a buck. It’s not the fact that money became involved but the dilution of the holiday that hurts not just us, but the country in total. Capitalism finds a way to corrupt what should remain sacred.

Unless you have served in the military or civil service abroad, you may not share my view. It’s difficult to verbalise or even consider the feelings of aloneness and separation you feel as you land in a hostile foreign country and especially if there is a conflict involved. Nothing drives home the solitude like someone trying to kill you. You are trained to look to your team for support, but your adversary feels the same level of terror you feel. Your only solace is your desire for self-preservation and your reason for being involved. There comes a moment you decide which urge to follow: Fight or Flight. Your conviction determined your actions and the level of fear you can suppress and still function and how deeply you are committed to your country and this cause. America does not hold the sole ownership of this. It is true of every soldier, in every army, in every war. We demonise our enemies. We vilify them to rationalise and legitimise our involvement: to make is stronger in the face of fear.

This day is not about the BBQ’s or National Concerts on the Mall or parades or backyard parties. It is about remembering the what someone gave for his or her beliefs in their country. It’s not about the sales and extravaganzas of shopping marathons at the local mega-mart. It’s not about the telethons or movie channel playing the aggrandised Hollywood versions of tribal conflict, humankind at its worst. It is all about those tragically lost to the lunacy and futility of war.

As you gather with your families and friends, please remember the families all over the world missing their loved-ones today. Remember that they gave everything for the cause of their country. They show their love and patriotism by what the gave.

A Veteran: Someone who, at one point in their lives, wrote a blank for check an amount up to and including their life, made payable to their country.

Plato said: “Only the dead have seen an end of war.” It isn’t just America that lost. The world is a little worse for these atrocities.

I refuse to accept the view that humanity is so tragically bound to the starless midnight of racism and war that the bright daybreak of peace and brotherhood can never become a reality… I believe that unarmed truth and unconditional love will have the final word. Martin Luther King, Jr.