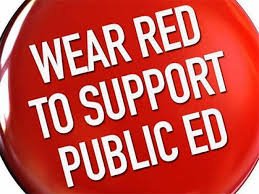 I started wondering about this recent movement of teachers and their attempt to change fiscal policies toward education. Why the association with this particular colour? There are other powerful colour associations. I was also curious about the reasons. I’m not a teacher, but I am interested. Why not choose one of these colours instead?

The colour purple is associated with independence. Our European cousins’ see this colour as that of royalty, power, and strength. It was the colour of the Emperor and the aristocracy. It symbolizes leadership and confidence. Why not push for a more independent educational system? One not bound by governmental oversight and regulations. One that allows teachers the freedom (independence) to teach classes geared toward the abilities of the students rather than forcing these kids into neat little common core boxes of homogeneity? Everyone is the same… aren’t we? Don’t we want more confident leadership? Don’t we want well educated, thinking people capable of making value-based decisions? Isn’t this what we expect from our teachers; to shepherd our children to and through the power of learning and to help them become leaders?

Orange is the colour of warmth, success, encouragement, change, determination, stimulation, health, fun, enjoyment, balance, freedom, expression, intuition, and fascination. It is the colour of optimism and joy and creativity, unfortunately, something that is missing from our current educational system. Learning is about change, expression, and life balance between winning and losing. Teaching is about encouraging these attributes. Remember William of Orange, a major sponsor of the religious reformation in England: the protestant revolution?

The colour yellow is the colour of the sun and summer and renewal. Many spring flowers are yellow. It is a sacred colour in Asia. During the WWI hospital wards were painted yellow to cheer the patients, especially those with shell-shock. The colour yellow makes us happy and upbeat. It causes us to think of spring the season of rebirth and reawakening from winter. Yellow is the most visible colour. Everything from tennis balls to life-vests to taxi cabs is this colour to make them easily recognizable. Yellow could be the colour of awakening for these young minds and the rebirth of curiosity; the renaissance of education. Learning should be fun, and education full of promise.

The oldest symbol of socialism and by extension communism is the Red flag which dates back to the 18th and 19th Centuries; it was the official pennant colour of the French Revolution of 1848. This set the colour standard that would hold solidly through the 1950’s and the communist witch hunts in the US Government championed by Senator Joseph McCarty. When someone mentions China, word association makes me think “RED” as the predecessor. Does anyone remember the phrase “Better Dead than Red”? During the protracted presidential election of 2000, the New York Times decided that Red should symbolize the Republican Party because Republican starts with “R” and so does Republican to make it easier for the public to make the association. Knowing the political leanings of the New York Times to be Liberal, it follows that they would attribute this colour to the Republican those Commie, Pinko, Fascists, Bastards. (😉) Prior to this, the color red was associated with the church because of Christ’s blood and with the Monarchy because of the blood they spilt. Red means STOP! Do not proceed! Go No Further! DANGER!

Unfortunately, I think it was chosen because nothing else rhymes with these other colors. Think about it… Red for ED. Sounds pretty good, doesn’t it. But then so does “Better Dead than Red” from the 1950’s and Cold War era. What does this say about the crop of teachers organizing these protests. It could speak volumes about their politics, as well. Rather than thinking through the associations, they jump on an easily remembered phrase without thought of the ramifications or innuendo. It’s easy to recall and it rhymes. Much like the common core curriculum careening through our schools teaching memorization and rote in place of thinking and actual learning. Results measured against the federal metrics rather than actual comprehension. Which is most important? If the children measure up to these metrics they are ready for the next level of education; right? Absolutely not!

Here’s where we are today: The end of April 2018 American College Testing (ACT) released their finding that Arizona high school graduates were 2 full points below the national average. 42% of these graduates met none (0) of the College Readiness Benchmarks. This represents an increase of 2% over the previous year. There was a 7% decrease in career readiness over the previous year. This indicates the students’ viability in the career market. The national average is 27%, Arizona is 20%. Fortunately, there was an increase in the Science, Technology, Engineering, and Math (STEM) scores of 1.6%. 39% of the students that took this test met the benchmarks. It would appear that Arizona’s 2016 decision to abandon the Common Core standard in favor of more academic based standard is bearing fruit. However, compared to the national averages, well, here are the rankings:
New Hampshire was the top with a composite score of 25.5
Massachusetts was number two with a composite score of 2.4
Connecticut is number three with a composite score of 25.2
Nevada was last with a composite score of 17.8
Arizona came in forty-first with a composite score of 19.7.
This is based on the median number of 21.0 which indicates that anything above this number beat 50% of the other students. The highest possible score is 36 or a perfect score. It also indicates that there are 40 other states with better educational programs better than Arizona’s’. Only 17 states had 100% student participation. Arizona mustered 62% or our eligible students to take the test. Our neighbors in the People’s Republic of California managed 31% student participation but a 22.8 average score. I guess the smarter students took the test in TPRoC.

What does this say about education in this country? America is ranked 17th in the world educationally out of 40 countries. Switzerland is the top spender at $14,922 per student. Nationally, we spend about $11,000 average per student. In Arizona, we spend $7,208 per student. This is a pretty poor return on the investment. State budgets tell another story. K-12 (Kinder Garten through High School) teachers in Arizona average $42,474 annually. The national average is $58,950. Arizona is near the bottom… 43rd of 15. No, we didn’t add another state, they count Washington DC in these surveys. Healthcare is 45% of our Arizona state budget, Education is 18%. Our national Healthcare Budget is $1.040 TRILLION and Education is $68.2 Billion, about 6.5%. I can see that we’ll have an uneducated but healthy lower class of worker-bees, and a very well supported medical services industry. As an aside here: we need to reign-in our healthcare costs. More on this in another blog.

If we are preparing for our future, and I hope we are, we need to invest in our children. Every politician makes this claim. The rhetoric is full of the same promises and guarantees. Why is education the first place our elected mis-representatives cut when they need funds for pet projects like:
$24 Million for Abstinence Education in 2015
$948 Million for the M1 Abrams Tank in 2016
$55 Million for Save America’s Treasures in 2017
$65 Million for Homeland Security National Domestic Preparedness in 2017
$46 Million for the National Pre-Disaster Mitigation Fund in 2017

In total for 2017, there was $3.3 Billion tied to pet projects. That’s a SHIT-Load of books and paper… and a pretty healthy pay raise for the teachers.
Why do they target education? Because no one is watching these miscreants and demanding justification for their decisions. If they don’t represent our desires, they should not be reelected or better yet impeached for malfeasance and misappropriation.

Unfortunately, common core is full of socialistic concepts. It considers all students equal and the same. It recognizes conformity and teaches compliance. It does not recognize the varying aptitudes and abilities of the students. It continually lowers the standard to meet the poorer students’ needs rather than allowing children to progress at their own rate and to challenge them. Instead, it holds them back. Education is about success and failure. A trophy for showing up carries little weight in the modern workplace. Parents must recognize that their child is not always a prodigy nor will he or she be Michael Jordan or Sandra Day O’Connor. They may become normal and useful contributing citizens with normal jobs and average skills. Who better to identify these abilities or lack of ability than the teacher who spends every day with them.

I still can’t help seeing the association between this movement for educational reform and the French revolution. The French populace was tired of the King and his fiscal decisions to tax the third estate to support his foreign and domestic policies. They were financially exhausted by his liberal financial policies which continued to increase prices and place higher taxes on earnings to support them. Does any of this sound familiar?

I support educational reform. I think qualified, dedicated, degreed teachers should be among the highest wage earners. Entrusting our children to these professionals involves faith that the children are taught to learn and to think and faith that the information is appropriate to that end. The curriculum must present all sides of the subject or topic, not just those carefully vetted to fit a liberal Department of Education agenda. It should provide sufficient information to develop and form an individual conclusion and foster the formation of opinions based on knowledge and understanding, not hearsay.

Modern educations must include a return to the arts. Children that learn music or at least that are exposed to it, have better cognitive and reasoning skills than those that do not. I encourage you to read the book “This is your brain on music,” by Daniel J. Levitin. It is a fascinating read that explains how music affects humans and how our brain interprets and processes listening to and performing music. The same applies to art. What’s wrong with learning about drawing, colour selection and use, and sculpture. What about the domestic arts like cooking and sewing? Or the manual arts, like carpentry, wood-working, and shop? Least we forget the life-skills training like making a shopping list, financial management, and how to balance a chequebook? Where will our children learn to develop their creativity? Who better to identify nascent talents and abilities than a well-trained teacher?

My sincere hope is that some extremely bright academician and organizer saw the parallels to the French Revolution, its association with the colour RED and saw the connection: voila’! I fear this is more serendipity than intent. No matter, the game is afoot, and we are seeing the demand for changes. “Viva la revolution!”

Personally, I would have chosen another colour. I still associate Red with Socialism and Communism… and we all know that these systems are not sustainable and do not work…
I hope you know that…. You do, don’t you?
If not please read: